Posted on November 2, 2012 by momsaidwhat 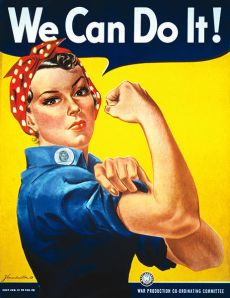 A little background on my personal, party platform.  I’m not the type of raging feminist who slams a door in a man’s face when he kindly holds it for me.  I’m not going to spit in a man’s face for offering his seat on a crowded bus.  In my opinion, these simple gentlemanly acts are far too hard to come by in our increasingly rude society, and I’ll be sure that Jeffrey is taught the art of chivalry and good manners.

I am a gung ho believer in treating women as professional and intellectual equals, and giving them the salary and benefits their male counterparts receive.  I also believe that the role that women play in the home as mothers and keepers of the household  is waaaaaaay under-appreciated and undervalued in the grand scheme of things;  but its a thankless job I happen to love.

Our division of labor tends to run along traditional lines.  I keep the house from falling into filth and squalor.  I make sure no one leaves the house dressed like a clown.  I am responsible for most of the poop and vomit cleanup.  Jeff fixes things.  The yard is mine.  The cars are Jeff’s.  You won’t catch me changing my own oil.  I’m not dropping a tranny.  Power tools are off limits for me given the danger I pose to myself and others.

So you can see, pretty gender specific, but all-in-all a typical male-female 30-70 percent split of duties.

I thought I had a car-related task to send Jeff’s way.  My car seems to have only two heat settings:  1) off, or 2) like I’ve opened the door of a blast furnace and stuck my head inside.  It’s been going on for a few weeks, and I was finally irritated enough to send the work order Jeff’s way–but this morning a miracle occurred.

My car healed itself.

I love when that happens.

Seems I’ll have to head home and break something else.  Just for the sake of fairness and domestic bliss.

This entry was posted in Molly-isms and tagged Feminism, Household Duties, Working Mom. Bookmark the permalink.