Did Something Crawl Under There and Die? 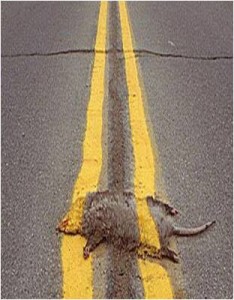 Something died in my car.  Now I just have to find it.

I opened my car door this morning to put the baby in his carseat when I was hit in the face by hot, moist death.  It was that bad.  So bad I could taste it.

I became a bloodhound, smelling my child, his filthy, crumb-laden car seat, every inch of upholstery, to no avail.

I checked all four tires to see that I hadn’t unknowingly ammassed any road kill points.

I opened the trunk to see if Jeff had stashed a corpse when he drove my car last week.

This leaves me with just one other place something rotten could be hiding…under my seats.

I’ll tell you that the thought of exploring just what may be causing the noxious odor under my seat is frightening to me.  I’m just glad that both the baby and our family dog have been ruled out.  Yup, that bad.

Unfortunately for me, I was running late this morning and did not have time, nor proper hazmat gear, to stick a hand under there.  I figured I’d have to deal with whatever it might be after work, after it had marinated in a hot car for eight hours.

I rolled down the windows and turned up the radio.  Problem solved.

Today at work, I’ve narrowed it down to two possibilities

Best case scenario: a sippy cup full of milk that Jeffrey threw to the floor in protest.

This entry was posted in Molly-isms and tagged Bad Smell in Car. Bookmark the permalink.