Kumbaya with the McClelland’s

The Pittsburgh McClelland’s just got back from spending a long weekend with the Rhode Island McClelland’s.  My brother and his wife Audrey, much to the delight and relief of their mothers, finally had their four heathen children baptized.  From what I can gather from “The Captain” and Sharon, God has little mercy on the souls of ANYONE, old or young alike, who has not received the blessed sacrament of baptism.  (Let it be said, if God is willing to send these four boys to Hell, I consider myself to be in grave danger).

Nevertheless, it is a big relief to everyone, most notably to Audrey and Matthew, that this blessed event is in the books; in equal part for their sons’ salvation from the fires of Hell AND in successfully getting the grandmothers off their backs.  (I’ll note that nagging/gentle prodding from “The Captain” and/or Sharon is akin to eternal damnation.  These two don’t mess around.)

After this action packed visit with our neighbors to the north, I thoughtuse this blog post to share with you what a “long” weekend with the McClelland’s looks like…

That’s the kind of long I’m talking about.  When I say “long” weekend, I mean loooooooooooooong weekend.

Oddly enough I can’t stop thinking about how much I miss all of us being together, and how I wish we lived closer so that we could see each other more often.  Call me a glutton for punishment, but there is no substitution for some good ol’ fashion family bonding–McClelland style. 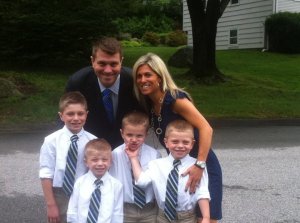