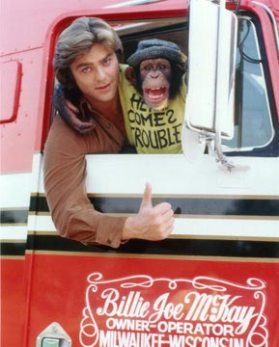 The heart of America beats with the blood, sweat, and tears of the long haul trucker.  My super spouse, Jeff, drove a truck for a number of years, saw every inch of this great nation, and has routinely schooled me in the rigors of this often thankless occupation.

I understand the impact that imposing or increasing tolls on interstates has on the tiny towns that make up the fabric of the U.S.  I know intimately of the deadlines, the sleep deprivation, the weeks alone rolling down endless highways through the night.  I get it.  I get it.

Truckers move America.  They drive our economy.  They get us all our stuff.  For this, I love them very, very much.  I just wish they didn’t have to deliver our beloved stuffs in the middle of Downtown Pittsburgh in the heart of rush hour traffic.  It just doesn’t work for me

Though I’m not currently serving in any professional capacity that might allow me to write policy of any kind; today, from behind the steering wheel of my Camry and in between strings of expletives, I wrote policy.

NO 18-WHEELERS ALLOWED IN PITTSBURGH PROPER BETWEEN THE HOURS OF 8-9:30 A.M. AND 4-6 P.M.  FAILURE TO COMPLY WILL RESULT IN IMMEDIATE SUSPENSION OF LICENSE AND PUBLIC SHAMING BY ALL WHOSE MORNING YOU WRECKED UP IN YOUR HASTE.

Some might argue that as a dutiful employee I should give myself a little extra time to allow for such unforeseen morning obstacles.  I would counter your argument by saying that I did give myself a bit of breathing space this fine Monday morn, but sweet little Jeffrey quite literally took a dump all over my cushion.

Thus I have to turn my ire at some unsuspecting victim, for as any self-respecting mom would argue—my child’s poop doesn’t stink.  Today, it’s you, Billy Big Rigger.  Did you really think you could swing that tight, right hand turn without snarling three lanes of traffic?  For the fifteen minutes I bore witness to your masculine driving prowess, I thought I was watching the scene in Austin Powers where he does the endless 3-point turn in the narrow hallway.  Pittsburgh streets are much more suited to a horse and buggy than your rig, sir.

For the love of Jeff and the truckers of America, I’ll let you slide with a warning, Billy Big Rigger.  But, don’t let me catch you ’round these parts no more, or your ass is mine.  I’m writing policy.