Mondays with the Working Mom: The Butterfly Effect

I want to be more disciplined and productive writer, so I’m working on giving myself a daily structure to force this to happen.  I need to keep myself on a real short leash lest I risk hanging myself with my own procrastination.

Last week I decided I was, “Taking Back Tuesdays,” a one-woman campaign to establish lowly Tuesday to a respectable place in the order of days.  I don’t know that it’s ever been said by anyone that Tuesday is their favorite day of the week.  For most, it’s a wash.  Recently I’m concerned about being so casual with my use of time.  I’m trying to take personal account

I’m kind of looking for a similar Monday morning crusade to prompt my writing.  So as not to spend a year or more decided what to write about on Mondays, I’m just going to write about whatever finds its way into my mind during my commute to work. I realize that for me, the transition back to working mom and productive, taxpaying member of society affords me no shortage of ideas.

You’ve never seen a grosser comedy of errors than my Monday morning commute. I’m just hoping, for the sake of humankind, that the aliens are pitting all future encounters with Earth based on their observations of me; just flipping around all over the place like a fish on the bank. 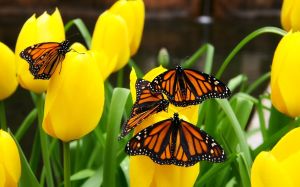 Today, I proved Lorenz’s Butterfly Effect, also known as Chaos Theory.  I’m sure you’ve heard the whole schpiel about how a butterfly flapping its wings somewhere in the world, sets of a chain of ever-increasing events which lead to a tornado being touched off on the other side of the globe?  Well I changed purses yesterday.   Chaos ensued.

As a general statement of self, I am admittedly the least systematic or logical thinker on the planet.  Not to downplay my own status as an intellect, I’m a pretty good little thinker by my own estimation and by all standardized measures of ability and knowledge (which on many days convince me of how faulty these measures truly are.)  I’m an ace thinker, but I can assure you that you NEVER want me to pack the car for vacation, and don’t call me to help you move.

So I changed my purse, from a carry-one-of-everything satchel, to a wallet-keys-cell phone pouch much more suited to a cluster like me.  (Consider the butterfly’s wings set in motion.)  I got out of the car from dropping Jeffrey off at the sitter and decided to take Snoop for another quick poop walk before work.  In my haste, I failed to make mental note of returning my keys to their proper place in the pouch, right next to their friends wallet and cell phone.

I walked Snoop to his favorite spot, let him off the leash, and decided to give him some privacy while I greeted to morning with a little stretch.  I spent all day and evening yesterday working in the yard like an itinerate farmer, and was feeling the burn.  For whatever reason, I’m not even going to speculate, I must have made the brilliant executive decision to drop my keys in the tall grass while I worked it out…cause that makes sense.

As I approached the house on our return I began to panic, knowing something had gone horribly wrong.  Frantically I dug through my pouch, feverishly searching its limited confines, convinced my keys had somehow burrowed into a secret hiding place in the lining.

I repeated my search at least fifteen more times and began to sweat.  I mean it.  I was sweating.  But to no avail.  This could only mean one thing; the keys were in the car.  Come to think of it.  So was my phone.  There goes calling the boss to tell her what a jackass I am.

If I was fortunate, the keys would still be in the ignition.  Those clever engineers at Toyota had outwitted fools like me, using their brilliant minds to save poor souls like me from ourselves.  Looked in the window; no keys in the ignition.

Not on the seat.

Can’t see them on the floor.

Check the ignition again, just in case they reappeared; you know kind of like when something you are in the mood for magically appears in the fridge the second or third time you open the door.  Oddly enough, they weren’t there, and they didn’t spring to life on the passenger seat or the floor for that matter.  I was totally screwed.

I’ll tell you why I was screwed, because I don’t listen when my fiancé is talking.  I zone out halfway through.  I do it to him, but you better believe I’m pissed when he isn’t hanging on to my every word.

Jeff wired a key in some secret spot on the undercarriage of my car, and clearly told me where it was–BUT I DON’T KNOW WHERE!  I also can’t ask him again, because I would have to admit to him that I’m not always listening to him when he’s talking.  I’m not willing to blow my cover just yet.

I did have a house key hidden for just this occasion.  I had made that mistake far too many times. (The last key debacle required me to walk two hours in the aftermath of a blizzard to get my spare house key from my desk at work).

I could get a mat from the house to lay on so I would be a filthy mess for work.  If I could avoid being hit by a car flying up our busy city street, I just might be able to find the key strapped to my undercarriage.  (I just wanted to use the word “undercarriage” one more time.  It’s just not one I drop in conversation with the girls all that often—or ever.)

I shimmied under my car and quickly realized I was outgunned.  There is no way in hell I’m finding that key without a map and a compass, and I can’t even call Jeff if I wanted to because my phone is in the car laughing at me.

Then suddenly I remembered the poop walk and the errors of my ways.  The keys were on the ground, in the tall grass, next to the guard rail.  Of course they were.  Thank you Saint Anthony, patron saint of missing things.  You came through again, my friend.

On this Monday, I’m so thankful that my wallet-keys-cell phone pouch has refined my routine so seamlessly, and pray that I’m not responsible for a tornado on the other side of the world.

This entry was posted in Moms at Work and tagged Getting Organized, Working Mom. Bookmark the permalink.

2 Responses to Mondays with the Working Mom: The Butterfly Effect